The East or Chancel window is the work of William Meikle & Sons, Glasgow. The topmost light depicts Christ on the cross, with two angels proffering the cup of suffering. Beneath is the scene from John 11:28 with the inscription, “The Master is come and calleth for thee”. The lowest lights depict the calling of the Apostles, with the calling of Saul (Paul) at the centre. 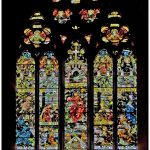 The West or Preacher’s window is of a more avant-garde design than the other windows. Its theme is Christ and the children, and it is the work of Stephen Adam & Son, Glasgow. Christ is seated centrally on the throne, surrounded by disciples, children with their mothers, shepherd boys and lambs. Several texts relevant to the theme are depicted, the key inscription being, “Suffer little children to come unto me: for of such is the kingdom of heaven”.(Matt. 19:14) 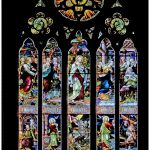 On the south wall, the window above the door to the hall corridor shows the aged Paul on the left and Dorcas on the right. The texts are from II Tim. 4:7 and Acts 9:36. It is thought to be the work of Meikle & Sons. The next four windows on the south wall were all commissioned by Messrs J. & W. Guthrie of Glasgow from the English artist Christopher Whall. Moving from left to right, the first depicts two scenes from the Noah story; the animals filing into the ark, and after the flood the thanksgiving and sacrifice of Noah (Genesis 6:8). The second is the vision of Samuel in the Temple (I Samuel 3), the third Abraham’s offering of his son Isaac in sacrifice (Genesis 22), and adjacent to the gallery is depicted the Parable of the Good Samaritan.  The lower section of this window shows the robbery, and the upper section the Samaritan in attendance, the priest and the Levite disappearing down the road. The story is found in Luke 10 but the text is taken from I Cor. 13:13. 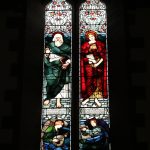 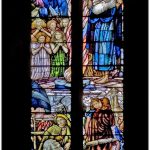 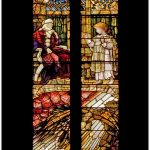 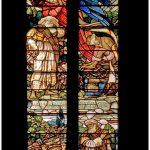 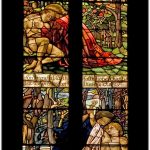 Opposite on the north wall the three lancet windows are like the West window being the work of Stephen Adam Snr. From left to right the subjects are (1) David playing before Saul (l Sam. 18:10), (2) Ruth and Boaz in the field of reapers (Ruth 2) and (3) Jesus visiting the home of Martha and Mary (Luke 10:38) where Mary can be seen sitting at our Lord’s feet while Martha is coming from the house. 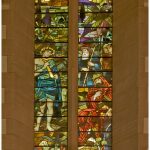 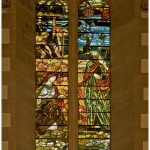 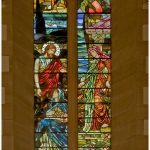 The two windows in the transept gallery depict Cornelius the Centurion with a quote from Acts 10:4, and the good and virtuous woman from the final chapter of Proverbs. These are also from the Stephen Adam studio, the very deep shades reflecting the style of Adam at his most mature. 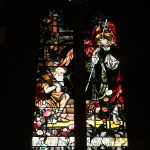 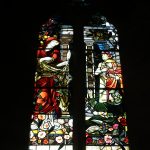 The three small windows in the side chapel were installed in1907 by the Rev. James W. Gardner in memory of his mother, sister and aunt. 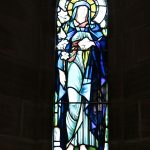 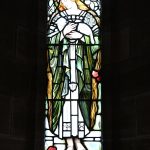 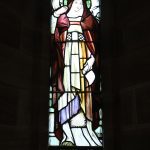 Some close-up details of the windows: 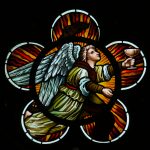 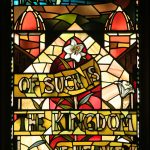 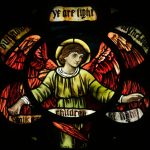 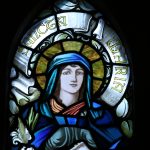 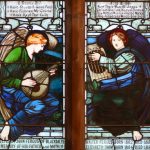 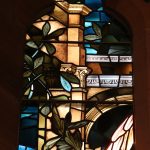 Bible verse of the day

For in the gospel the righteousness of God is revealed—a righteousness that is by faith from first to last, just as it is written: “The righteous will live by faith.”
Romans 1:17
DailyVerses.net
We use cookies to ensure that we give you the best experience on our website. If you continue to use this site we will assume that you are happy with it.Ok