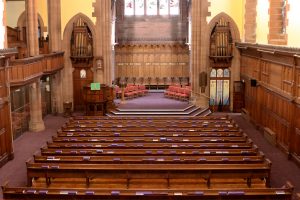 The church building was designed by William Kerr under T.G. Abercrombie of Paisley. Kerr was about 23 years of age at the time. The sanctuary lies on an east-west axis with a chancel to the east as is traditional. It is built of red sandstone from Locharbriggs and Corsehill in Early English Gothic style, a seven bay church with buttresses, a single aisle to the north and a 160 foot, three stage tower and spire, a session room (now the church office) and four bay hall to the south east. This hall was split into two levels a number of years ago. It now accommodates a choir room and the centenary lounge laid out in 1992.

Among the most prominent features of the exterior are the large traceried windows, the statues of Moses and St. John on the west gable and the gargoyle at the south-east entrance.

The church, along with the octagonal gatepiers, is a category A listed building. The final cost of the church, met by John Clark, was £30,000, the two manual Willis organ having been donated by his brother William. Mr. Clark made two main stipulations, that the church should be visible from the sea and that there should be no pillars to obscure the view of worshippers. This latter condition resulted in an intricate structure of roof timbers, comprising five principals of double timbers with tie and crown beams. Heavy struts spring from beautifully moulded and shafted capitals which terminate with carved bosses and support the hammer beams. These have intricately carved angelic figures on the ends, from whose hands are suspended the main lighting of the church. The chancel and transept ceilings are in the Gothic style, lined in wood with moulded ribs.

The walls are panelled by a 15 foot high dado of carved Austrian oak, topped by a finely detailed cornice. On the chancel panelling the text “Seek ye my face; Thy face, Lord, will I seek” is highlighted in gold. (Psalm 27:8)

In 2019, a number of alterations were made to the interior of the church. This was part of a larger conservation project supported by Historic Environment Scotland and the National Lottery Heritage Fund. Pews were removed in the transept and a side chapel created – The Mary Stewart Chapel. The chancel was extended and to accommodate this the pulpit was moved. A few pews in the nave were taken out to create easier access and the establishment of an AV desk. Glass doors were installed at three of the main entrances.

The church seeks to promote its heritage and two display cases in the main vestibule contain various artefacts. These include a silver spade given by the congregation to Mr John Clark for cutting the first turf at the building of the church. Also displayed in this area is an offering pedestal containing a bronze plate gifted by an African chief and brought to Largs by the famous missionary Mary Slessor of Calabar.

The War memorial is in the form of a bronze plaque and bears the names of church members who fell in the two World Wars together with appropriate regimental badges. A large tapestry worked by women of the congregation was dedicated in the church’s centenary year, 1992. Its principal image is the anchor, both the Christian symbol of hope and the trademark of John Clark.

Bible verse of the day

For in the gospel the righteousness of God is revealed—a righteousness that is by faith from first to last, just as it is written: “The righteous will live by faith.”
Romans 1:17
DailyVerses.net
We use cookies to ensure that we give you the best experience on our website. If you continue to use this site we will assume that you are happy with it.Ok